Season Three bolstered the already overstocked arsenal in Call of Duty®: Modern Warfare with a new handgun, the Renetti, an extremely versatile secondary. 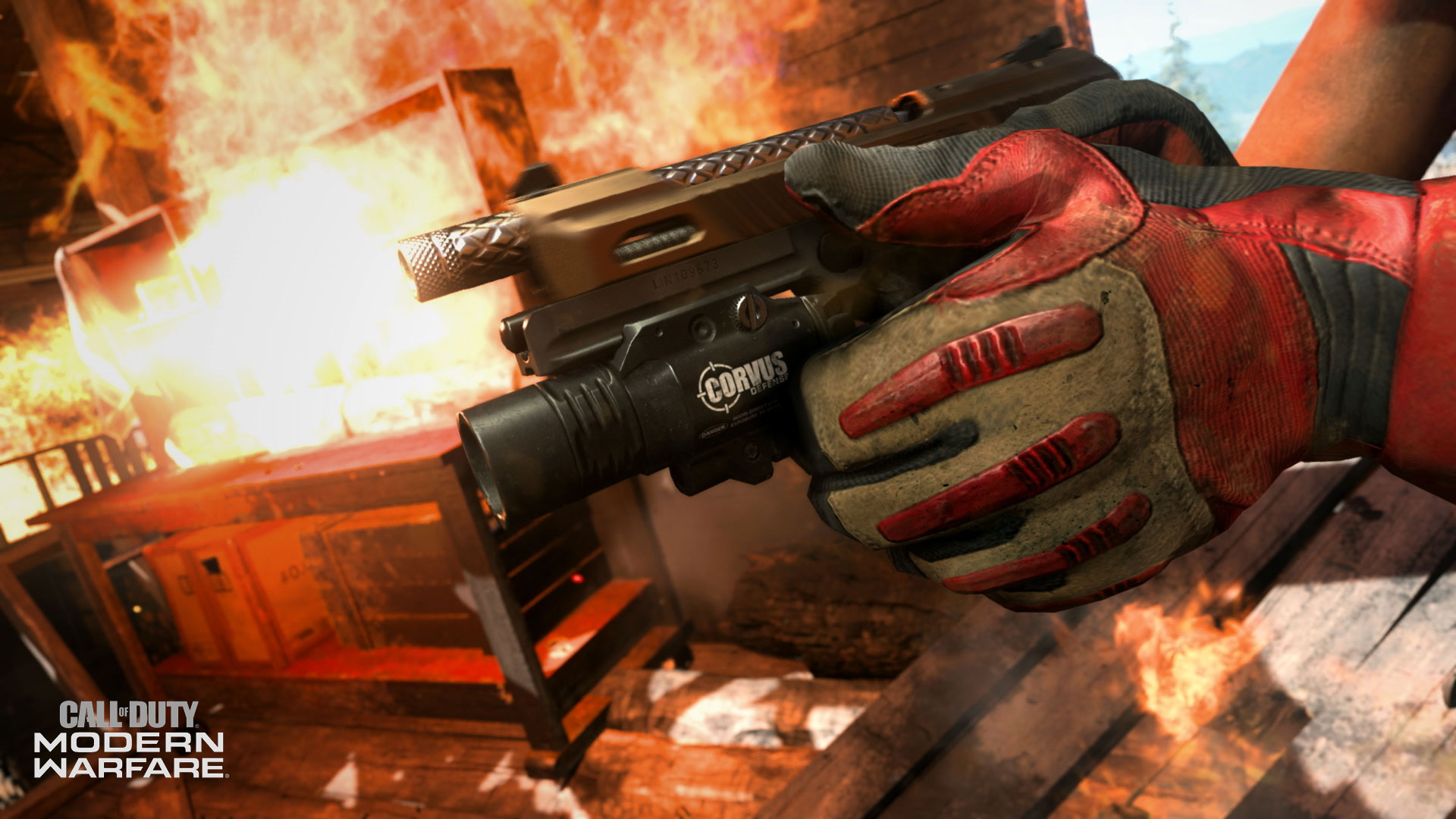 The Renetti blends some of the best qualities of handguns, making it an easy fit for a variety of combat scenarios.

At close range, expect a stock Renetti to take down an enemy without armor in three body shots. If you get at least one headshot in, then that tango will go down in just two hits. The standard magazine comes in at 15 rounds with the option to equip magazines up to 27 rounds, ensuring you have no shortage of ammo. 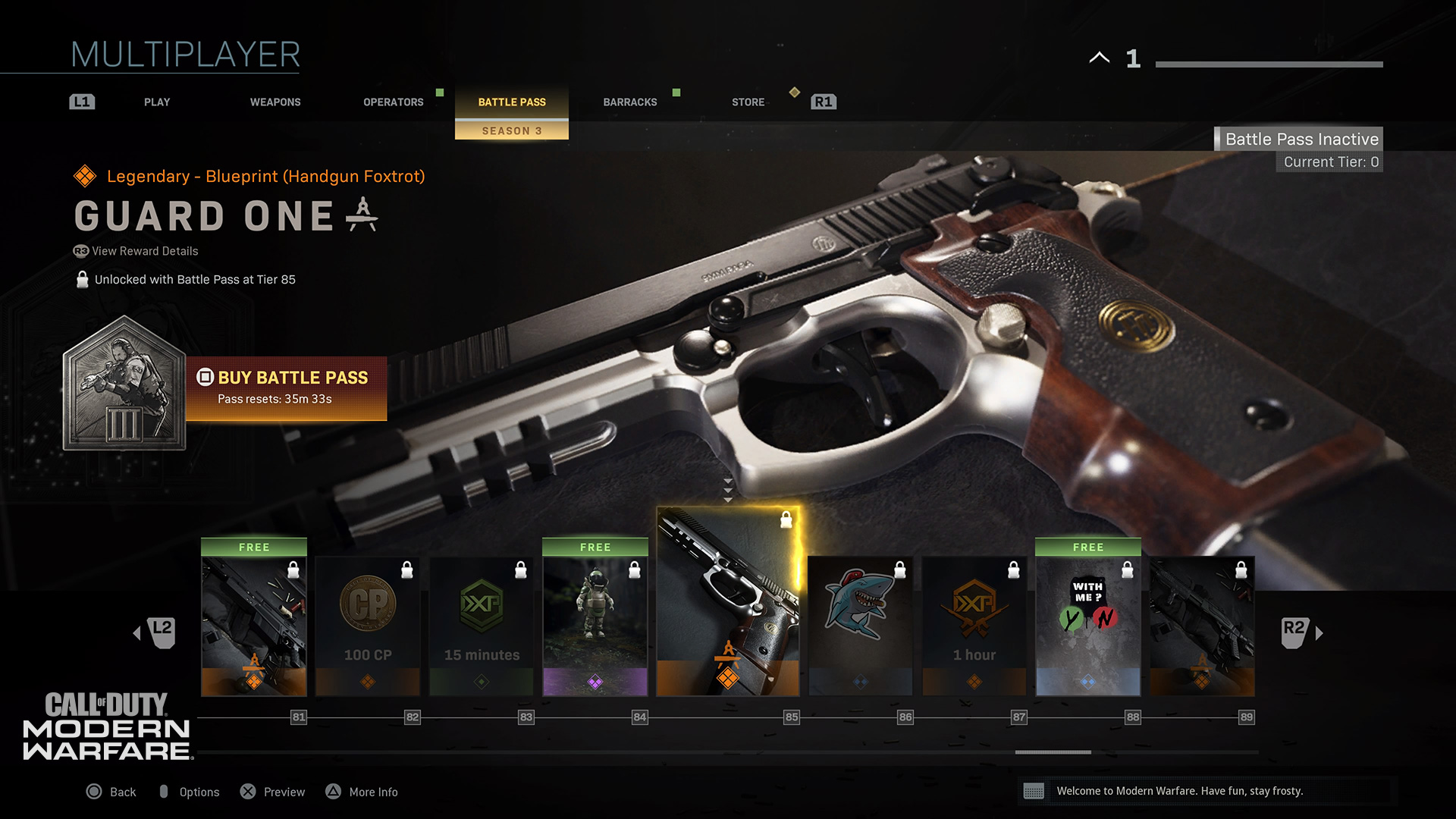 What makes the Renetti stand out is its Mk3 Burst Mod attachment, featured on its Guard One weapon blueprint unlocked at Tier 85.

The Mk3 Burst Mod turns the Renetti into a three-round burst pistol, the first of its kind in Modern Warfare. It is possible to down an enemy with a single burst, which fires at an increased rate compared to single shots. Although it comes with significant recoil, the Burst Mod, as seen with the Guard One, is one attachment seriously worth considering across all configurations. 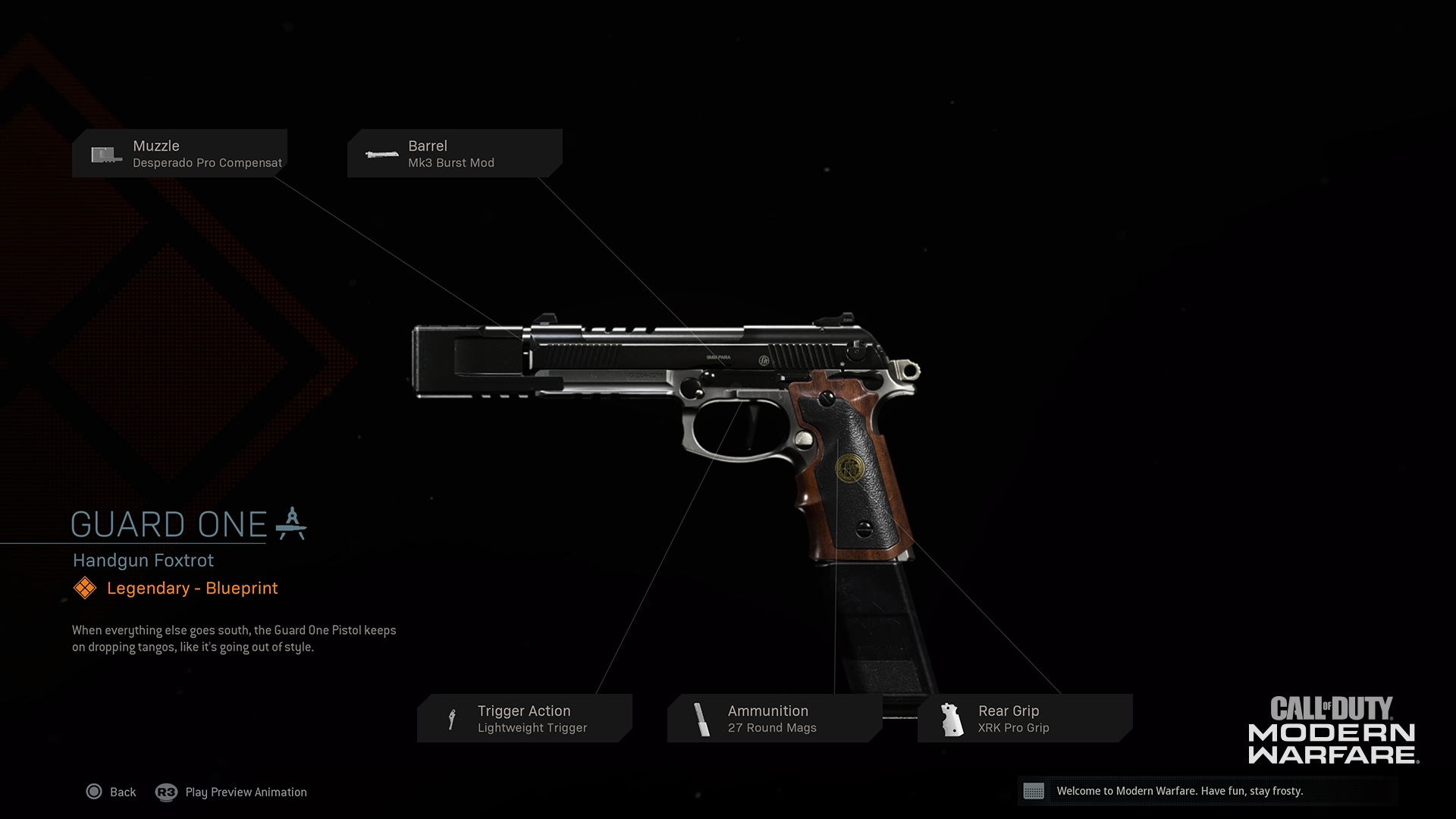 1. The ‘Guard One’ Blueprint
Also included with this blueprint is the Desperado Pro Compressor, which helps with recoil control along with the XRK Pro Grip. The Lightweight Trigger allows you to fire all nine bursts that the 27 Round Mag provides in quick succession. Suggested paired primary weapon: assault rifle Suggested paired perks: Kill Chain, Hardline, Tune Up Suggested paired equipment: Frag Grenade, Flash Grenade 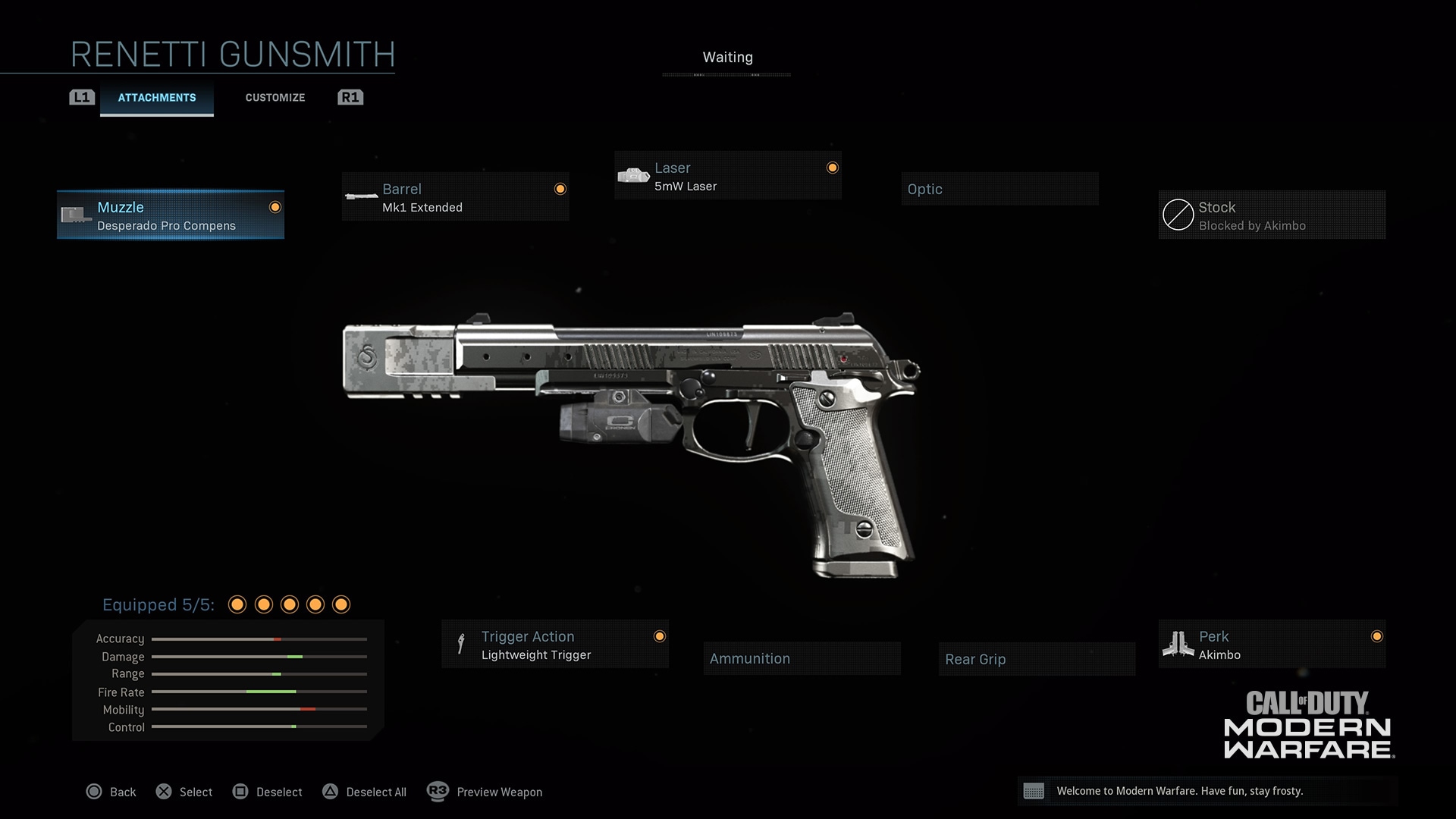 2. Akimbo
This configuration boasts better hip fire accuracy, longer range, faster shots, and better recoil control. You can unlock Akimbo on any handgun by selecting the weapon, then, in Gunsmith, scroll through the perk attachment list to find Akimbo and complete the associated challenge to unlock. 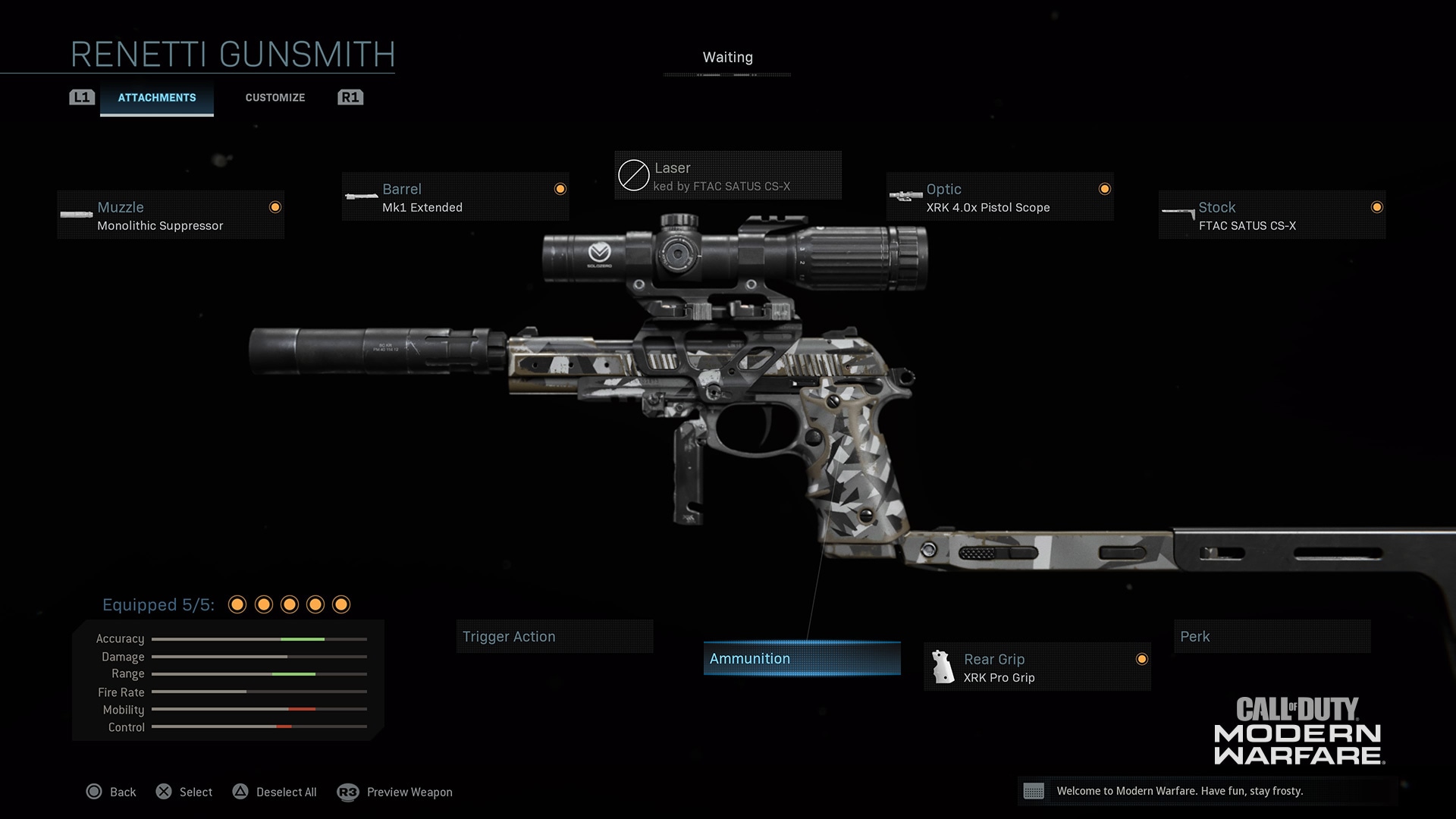 Kitted for maximum range with a Monolithic Suppressor and Extended Barrel, this Renetti configuration has strong accuracy and can become a headshot machine – especially in Hardcore modes.

Of course, these are only three possible configurations for the Renetti that amplify certain playstyles. Utilize Gunsmith and blueprints to craft weapons that fit your needs in battle. Enjoy using this weapon once you earn it, free, at Tier 15 in the Battle Pass system.